Womenize! was a day-long game development conference belonging to gamesweekberlin that was hosted in the Kulturbrauerei, where the conference Quo Vadis was also hosted on the days before. It used much less space and was smaller than Quo Vadis, but still offered many interesting talks, mostly focused on surviving and being effective in the industry or on leadership. Almost all of the speakers were female, a contrast to many other conferences, such as Quo Vadis. 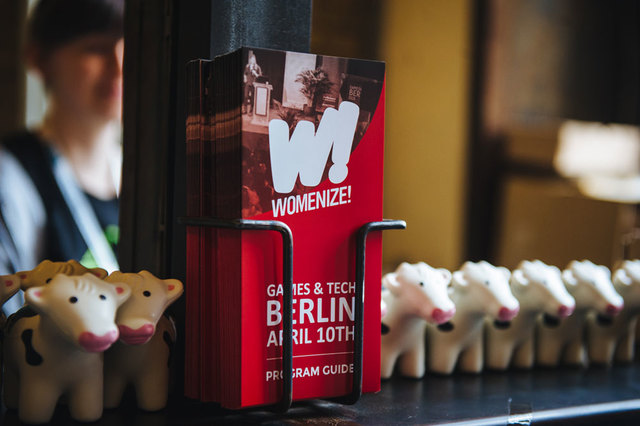 Visitors who are not specialised but have a mixture of talents could take inspiration from Leontine Jenner’s talk on being the jack-of-all-trades in the games industry. Being a generalist gives you the ability to adapt according to her experiences. Leontine said that her role as a project manager helped her find success connecting the dots between other stakeholders in projects. Having a small amount of knowledge of different areas of game development allowed her to understand the needs of different team members. She encouraged people not to be afraid of being the jack-of-all-trades, and to see it as a positive attribute.

Valentina Tamer from King helped give her audience an idea of how narrative design in mobile games is different from in other games, attributing experiences to her work on Candy Crush. She explained that narrative design encompasses all narrative experiences in a game. The worse the narrative design, the harder a game is to play, and on a smart phone, where players play for a short period of time and games are not just competing against other games, but against other apps, mobile narrative design has its own requirements. A game must be easy to learn, should interrupt the player infrequently, and may even need to repeat information, as a player may have long pauses between each play session.

An inspiring talk on leadership and team management came later from Rae Grimm. She describes her team as a “caring dictatorship”, where she is hard, but fair, honest, and direct. She recommended understanding what each team member needs and what needs carry over between team members, trusting team members, and not being afraid to be inconvenient if it’s necessary for the job.

Finally yet another inspiring and somewhat philosophical talk came from Sarah Noack, who motivated the audience to reconsider what courage means, a skill which not only minorities in the game industry and other industries need, but all people. Courage needs an emotional motivator, and although many believe courage is the absence of fear, courage actually requires it. She argues that courage is often interpreted as acts for the ego, but courage requires honorable intention and is the vehicle that moves us from our comfort zone to what we want.

nutrax cbd oil [url=http://cbdoilblk.com/ ]what is cbd oil good for [/url] cbd oil for dogs cbd oil near me

cbd creams for arthritis http://buycbdoilsm.com/ cbd oil price <a href="http://cbdoilwshop.com/%20">lazarus naturals </a> how do you use cbd oil

http://cbdoilwshop.com/ hemp cbd oil cbd near me <a href="http://onlinecbdoilfda.com/%20">cbd drops </a> cbd online

cbd oil at walmart http://onlinecbdoilfda.com/ cbd for dogs <a href="http://mynewcbdoil.com/%20">cbd oil for sale </a> cbd medic